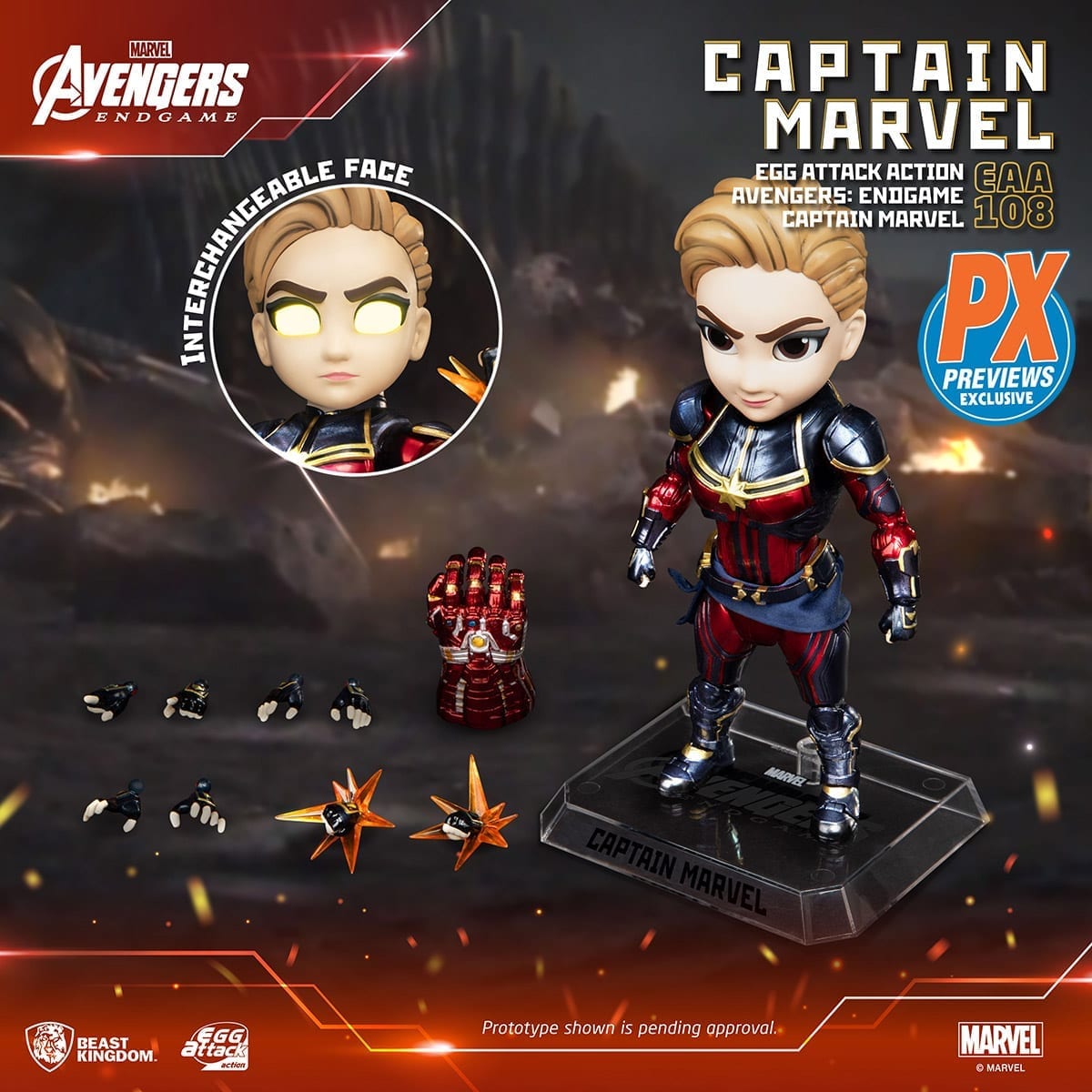 Captain Marvel from Avengers: Endgame Comes to the Rescue as a New PREVIEWS Exclusive Action Figure

Concluding the Marvel Cinematic Universe saga, Avengers: Endgame brought together nearly every character introduced since its launch back in 2008. Carol Danvers, also known as Captain Marvel, joins the Avengers in the final battle of Endgame with a new costume and haircut to boot. Beast Kingdom introduces the latest Egg Attack Action release of Captain Marvel with the Avengers: Endgame Edition!

Standing at 6″ tall, Captain Marvel is sporting her famous red, blue and gold costume including the legendary star on her chest plate. This new figure comes with two newly designed face plates: one with movable eyes, and the other with LED glowing eyes that really light up! Carol Danvers is ready to take flight and help her fellow Avengers with a real cloth material belt, 22 points of articulation, replaceable hands, as well as a host of accessories including Tony Stark’s Nano Gauntlet with all five Infinity Stones, 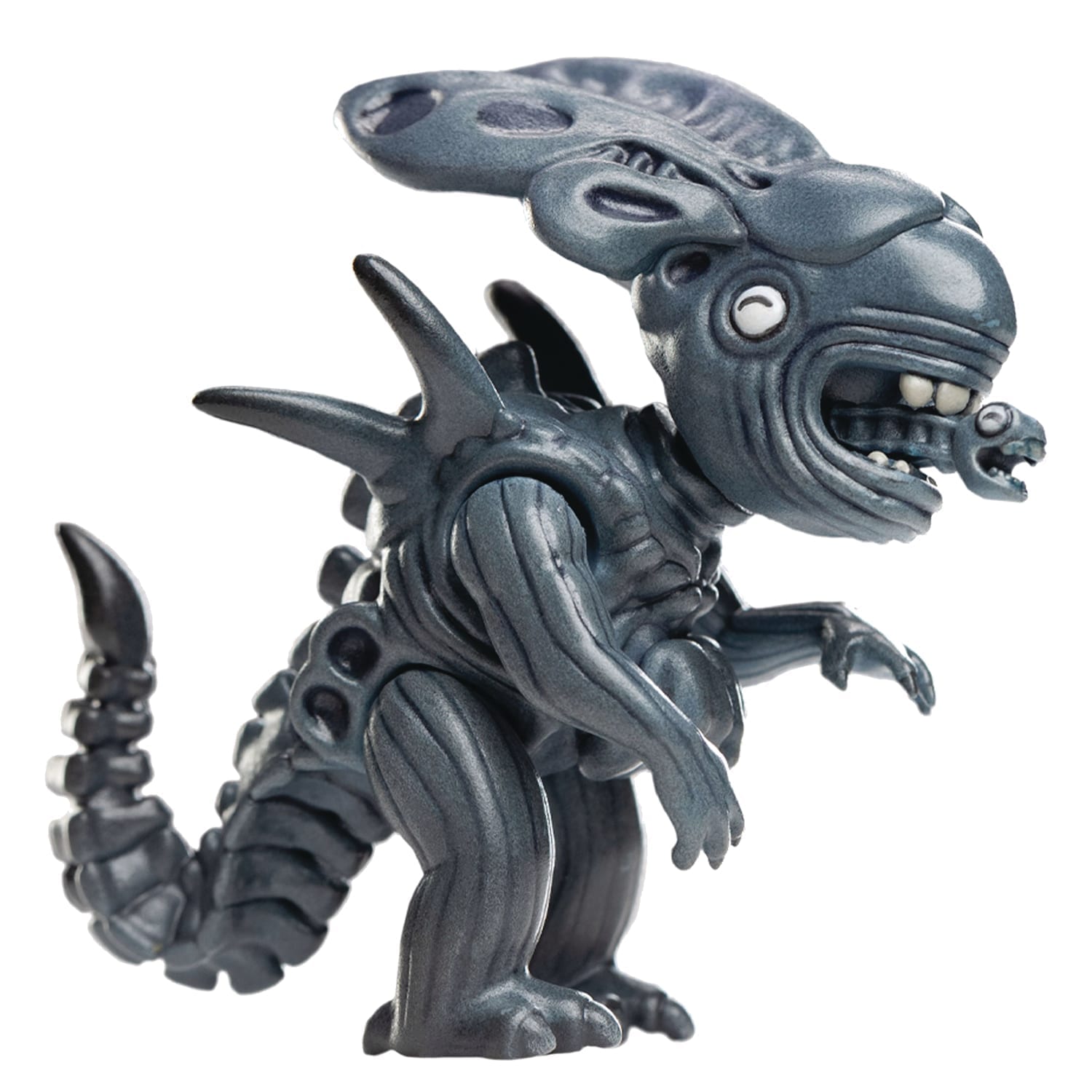 From the scientific, un-clumsy geniuses at Weta Workshop comes the mind-boggling MICRO EPICS! Microscopic marvels that are definitely supposed to look like that, no matter what you’ve heard! These stylized figures measure about 3″ tall and each comes packaged in a stackable Perspex boxes with rotating turntable so you can admire their micro levels of detail without taking them out of the package.

With only three figures to start, this line presents the perfect opportunity to start collecting these mini marvels without the massive investment of multiple minis. Keep an eye out for wave two in the near future which wil feature figures from Chappie, Aliens, and Borderlands 3! 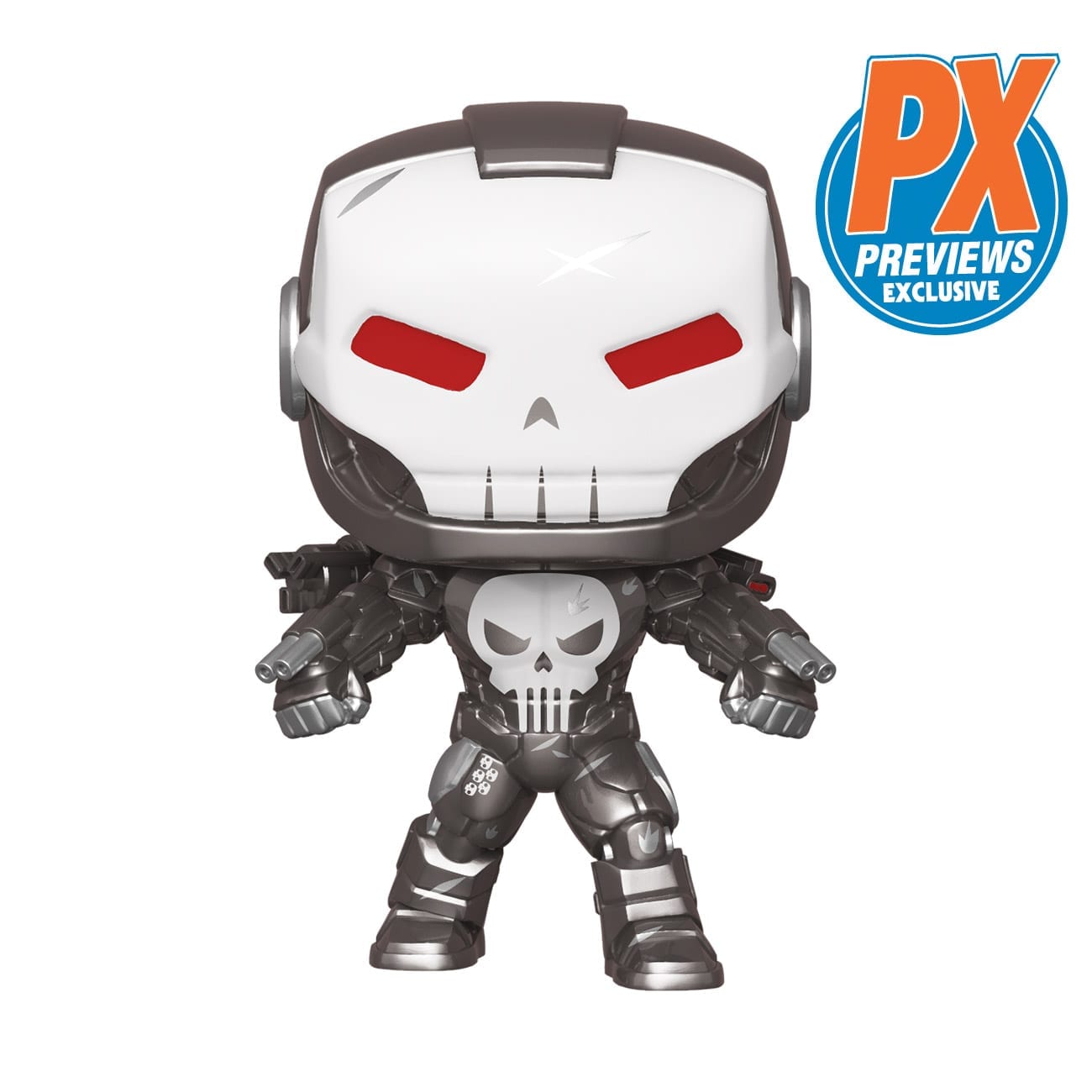 The Punisher Suits Up as War Machine for a New PREVIEWS Exclusive Pop!

For years, Frank Castle has been fighting his one-man war as the Punisher, but when he’s offered the tools to take his fight global, Frank Castle dons the high-tech armor of War Machine!

Now this infamous incarnation of Marvel Comics’ timeless vigilante is ready to rock as a PREVIEWS Exclusive 3-3/4” vinyl Pop! figure. As usual, this Pop comes packaged in a collector-friendly window box, perfect for display in your Marvel Collection! 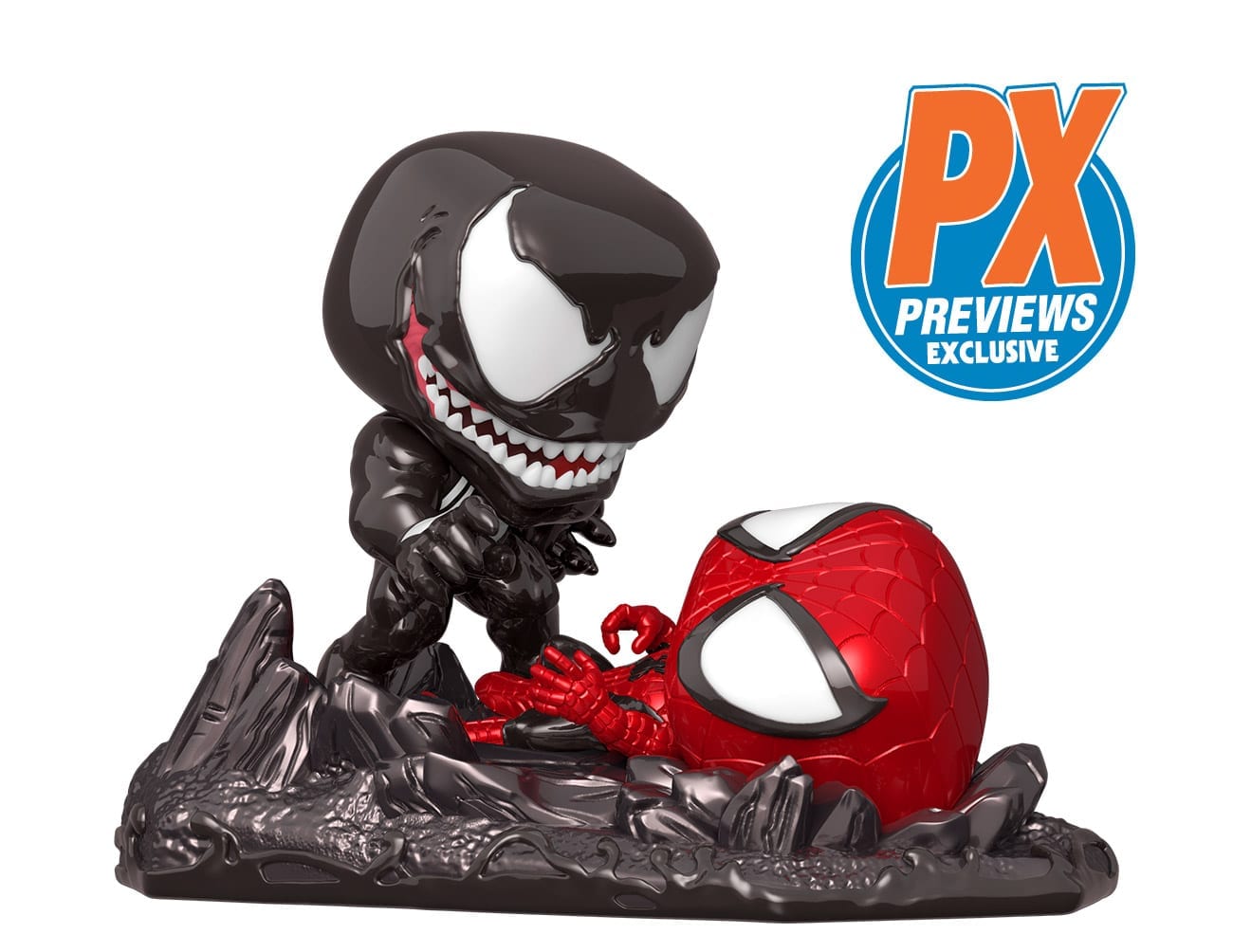 Featuring a special rocky diorama base and two full-sized Pop figures sculpted as part of the scene, this Pop! Comic moment comes packaged in a collector-friendly window box, perfect for display in your Marvel Collection!

The PREVIEWS Exclusive Pop Comic Moment Marvel Spider-Man Vs Venom Figure is available to preorder now at MaltaComics. Spider-Man and Venom are currently scheduled to rumble into comic shops April 29, 2020. 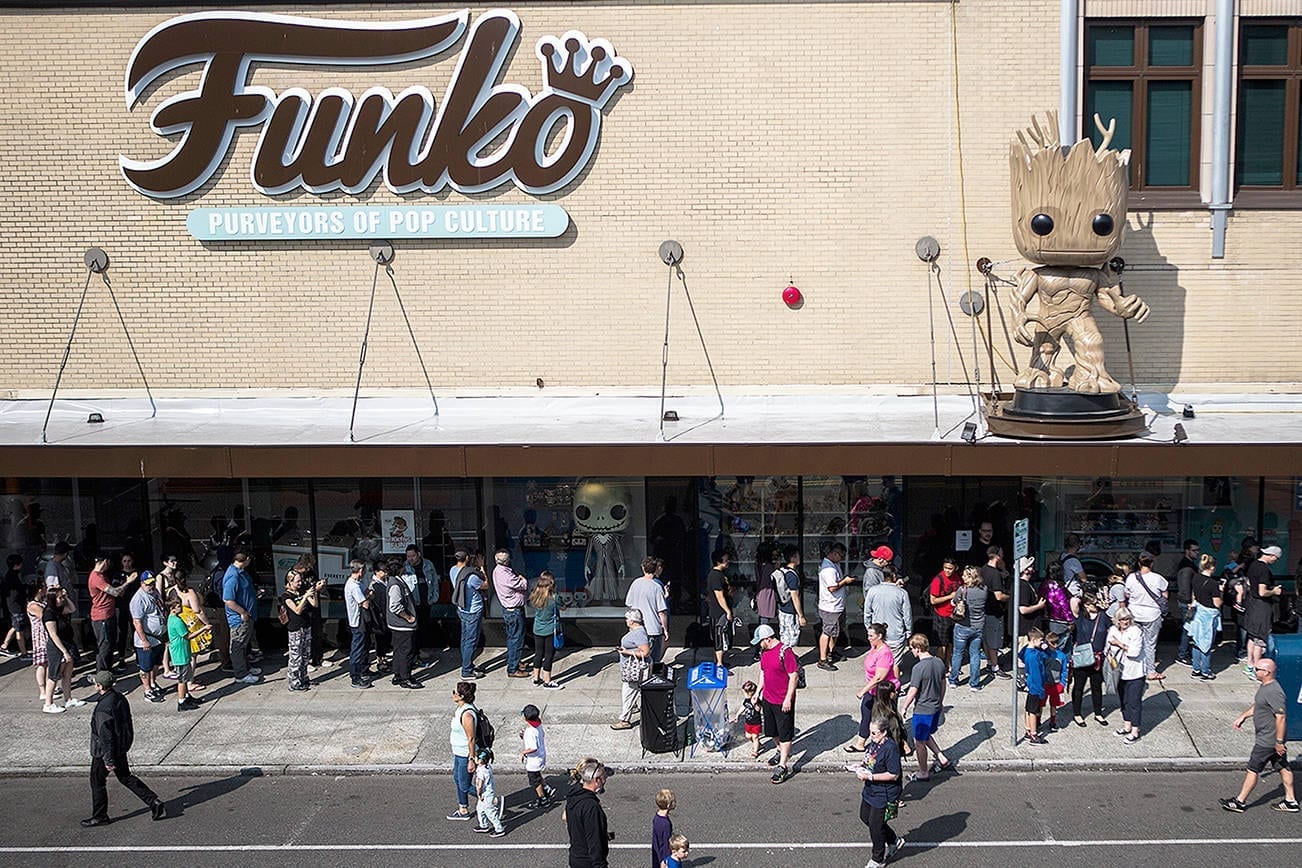 Things do not look great for Funko. The pop culture company released its preliminary results for the holiday quarter Wednesday, revealing substantial sales declines, a writedown of inventory overstock, and a surprising loss for the quarter.  The news comes after a big sales jump in Q3 produced less-than-expected profits.

Funko’s worldwide sales declined 8% to $214 million, down from $233 million in the year ago period, and way below the $264 million expected by analysts.  The company said its sales were below expectations in “mature markets,” which included the U.S., Canada, and Australia, because of a “challenging retail environment.”  Funko said its sales to its top customers were down, and that sales related to “certain tentpole movie releases” were soft.

One of those “top customers” was likely GameStop, which has been Funko’s #1 customer; the troubled chain reported that its holiday sales were down 27.5%.

When sales on collectibles go down, inventory quickly becomes devalued, and that clearly happened to Funko over the holidays; it took a $16.8 million writedown on overstocked inventory in the quarter.

And when sales are down and inventory declines in value, losses follow.  Funko is expecting that its final numbers for the quarter will show a los of $6.0 to $6.7 million.

The tough times are apparently not over for the company, which predicted soft sales through the first half of 2020, and sales growth in the high single digits to low double digits for the year, which would be a substantial slowdown.

In further bad news for brick and mortar retailers, Funko said that it expects to find growth in direct-to-consumer channels and e-commerce.

Full results for the quarter and year will be released in March.  The share price declined over 35% in after hours trading. 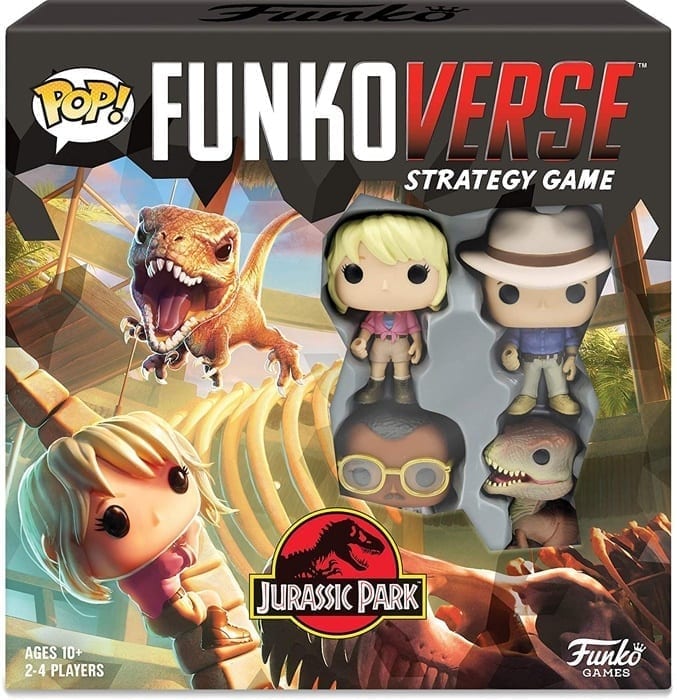 Funko, Inc. revealed two new Jurassic Park sets for the Pop! Funkoverse board game line for release in Q1 2020. The Pop! Funkoverse line was first released in 2019 as an expandable light strategy game with an initial release of six games.

Alongside the first Jurassic Park set, Funko will release a Jurassic Park Expandalone set where players can either play this set in a one-on-one scenario or combine it with other Pop! Funkoverse sets for a larger game. The Expandalone features a Dr. Ian Malcolm figure and a T-Rex figure. The box includes 2 characters, 2 character bases, 2 character cards, 2 basic characters, 2 basic character cards, 2 double-sided scenario cards, an item cards, 3 status cards, 2 Cooldown tracks, a double-sided map, 6 game tokens, 13 game markers, 6 dice, 11 points, a starting player marker, and an instruction set. It will retail for $24.99. 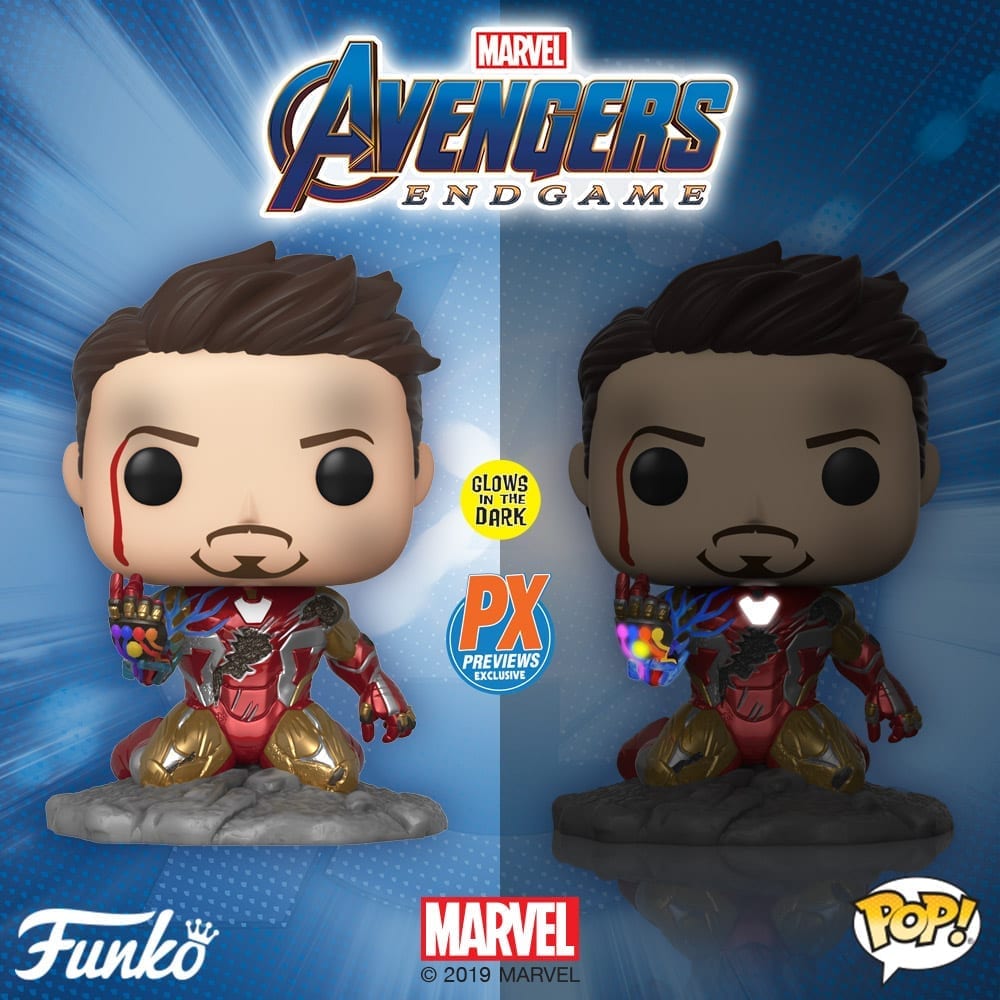 Capture the most epic moment from Avengers: Endgame for your Funko collection with this PREVIEWS Exclusive glow-in-the-dark Iron Man Pop figure!

Featuring the signature Funko style fans have come to know and love, this dramatic battle-damaged Tony Stark kneels on a sculpted terrain base and features a glow-in-the-dark Arc Reactor and Infinity stones to bring this piece to life.

Each PREVIEWS Exclusive I Am Iron Man Glow-In-The-Dark Pop! Figure stands about 4” tall and comes in a collector-friendly window box, perfect for display!

Preorders are available now at MaltaComics! Iron Man snaps into stores after March 25, 2020. 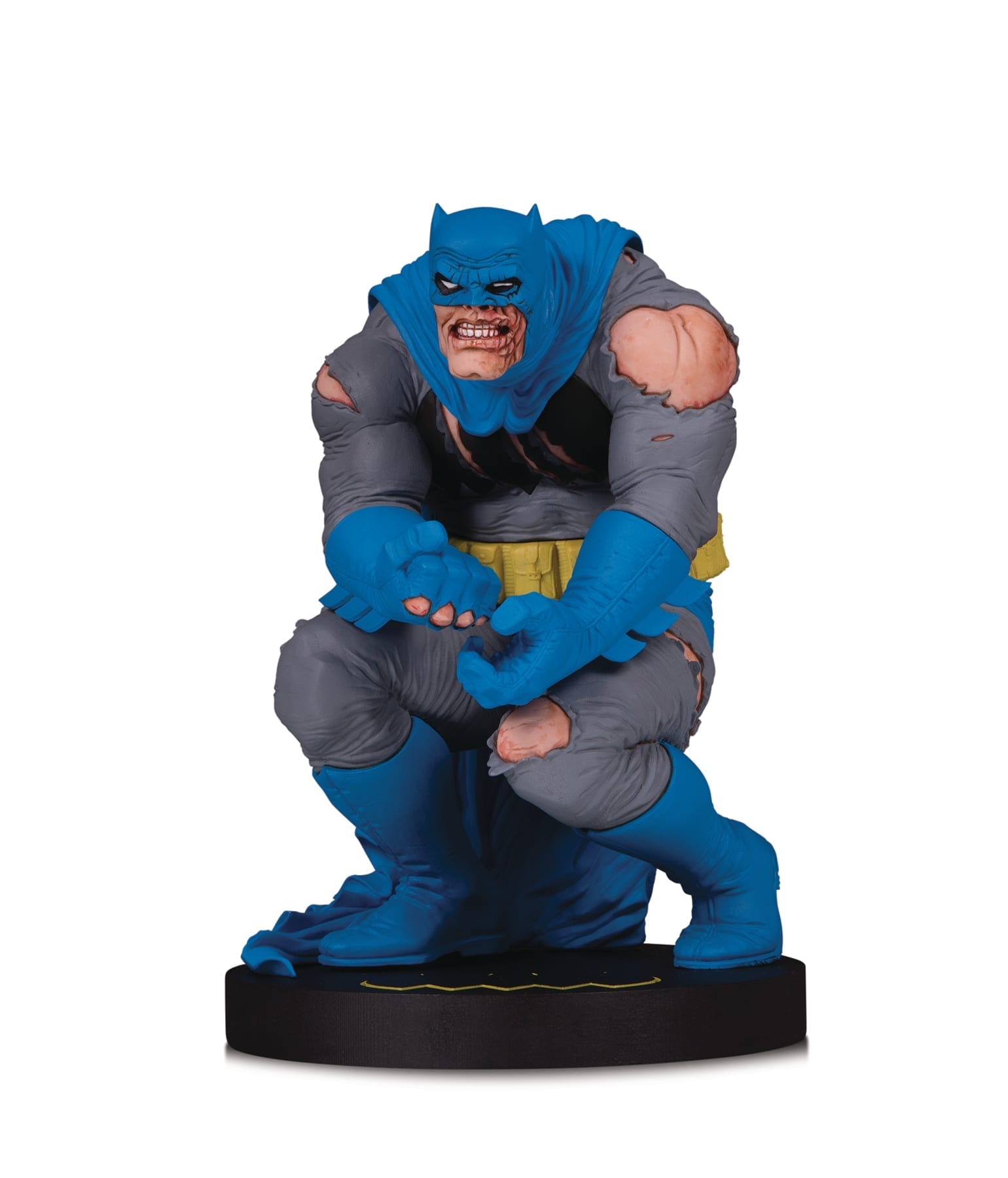 This impressive statue showcases the ravaged, gritty and iconic look from Miller’s iconic Batman: The Dark Knight Returns. From comic book to 3-D polyresin statue, this piece is a real testament to the impact a comic can have on generations of fans.

The 8″ tall DC Designer Series Batman by Frank Miller Statue SRP: €169.99 will be limited to 5,000 pieces and individually numbered for collectors.

This beautifully rendered statue will be shipping to stores this week on Wednesday, November 27th! Currently on a Preorder Offer until at the end of the month at MaltaComics for €149.99; check out more images below! 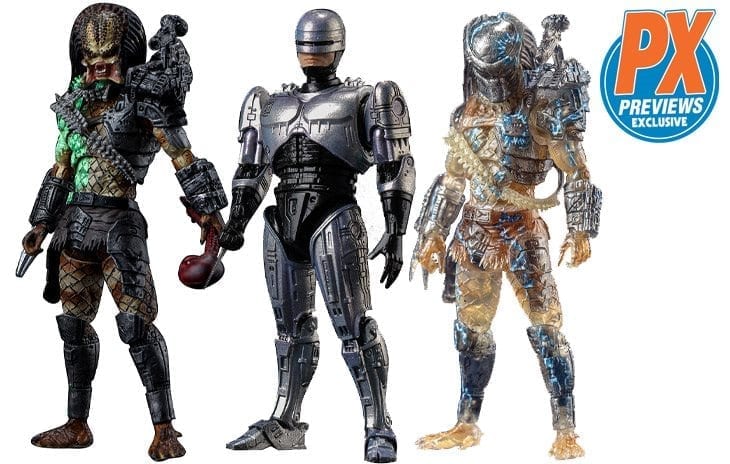 Based on the original 1987 Predator film where the Predator stalks his prey with deadly precision, this Battle Damage Jungle Predator is a 1/18-scale figure that features full articulation and stands approximately 4 1/2″ tall. This new PREVIEWS Exclusive Jungle Predator figure features a battle-damaged appearance and comes with a bloody spine accessory and a stand for easy posing and display.

From the 1987 classic Robocop, Hiya Toys presents this PREVIEWS Exclusive 1/18-scale action figure of Robocop himself! Featuring a metallic paintjob that mimics the look of his armor in the film, and hand with data probe, fans can recreate their favorite scenes from Robocop with this 4 1/2″ tall film accurate figure. Additionally, Hiya Toys has created a battle-damaged version of Robocop, with an appearance that mimics the look of his armor at the end of the first film and his hand with a data probe. The PREVIEWS Exclusive Robocop 1 Battle Damage Robocop is a 1/18-scale action figure.

From the team at DC Collectibles comes THE premium-grade action figure line for DC characters. These nine-inch highly poseable collectibles come with multiple pairs of hands and accessories, so fans can create their own ultimate renditions of their favorite characters. To help bring these figures to life, the team at DC Collectibles brought on concept designer Riccardo Federici, as well as sculptor and figure designer Wonil Song, to breathe life into these extraordinary action figures.

DC Prime is a best-in-class action figure line designed to be the centerpiece of any collection, direct from the source.

For the first release from the DC Prime line, the team could think of no better hero than the Dark Knight himself-Batman. This massive collectible was carefully designed to be the ultimate Batman action figure. With over 23 different points of articulation, multiple pairs of hands, a wired fabric cape and three unique heads, there are thousands of unique Dark Knight moments just waiting to be created. For those fans looking for the best-in-class Batman collectibles – your action figure has arrived.

Batman Prime  is now available at  MaltaComics with a Preorder offer of €119.99 (Regular Price €134.99! Click here to see more information on the development of the Batman Prime figure!