Games Workshop recently revealed the newest boxed set for its iconic Warhammer: 40,000 game and now starting from July 11th there will be a two-week pre-order window and Indomitus and friends will hit shelves on July 25th.

Called Warhammer 40,000 Indomitus, it includes a small Space Marine and Necron army. Not intended as a starter set, Indomitus is intended for established, dedicated fans looking to get a jump on the new 9th edition of the tabletop miniatures wargame.

The boxed set includes the Warhammer 40,000 Core Book, with all the rules needed for 9th edition. Games Workshop says the boxed set will only be available for a limited time. No price or release date was given, but it’s expected to start shipping soon.

“This is quite simply the biggest and best boxed game we’ve ever released for Warhammer 40,000,” Games Workshop said in a news release, “representing the cutting edge of miniatures design and the latest evolution in rules development. This boxed set is for the fans, and a fitting way to leap into the new edition for anyone who loves Warhammer 40,000.”

The boxed set includes no traditional gaming aids — no rulers, no dice, and no blast templates. During a Twitch livestream, the designers revealed that exclusion allowed them to include more miniature than ever before.

The Space Marine force is comprised entirely of the new, taller, Primaris-style soldiers first introduced in 2017. It also includes the first revamp of the Space Marine motorcycle in more than a decade. The Necron force is similarly unique, with many new sculpts. The set includes a massive new miniature called a Skorpekh Lord. The insect-like sentient robot figured prominently in the recent reveal trailer. A member of the Heavy Metal painting team said fans should look forward to a full range of new Citadel paints and washes to support its unique, weathered metal look. 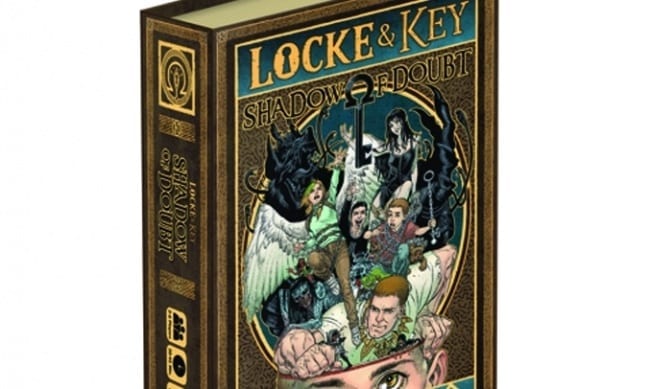 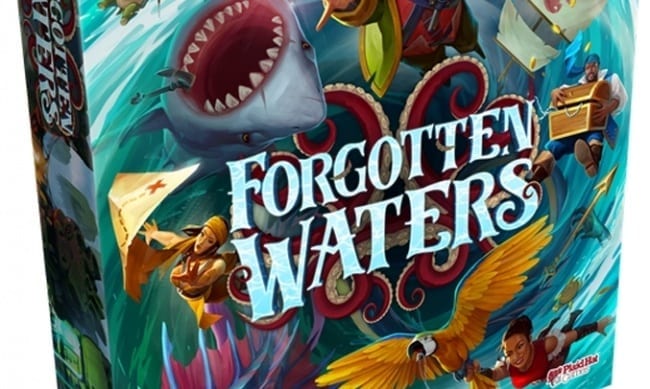 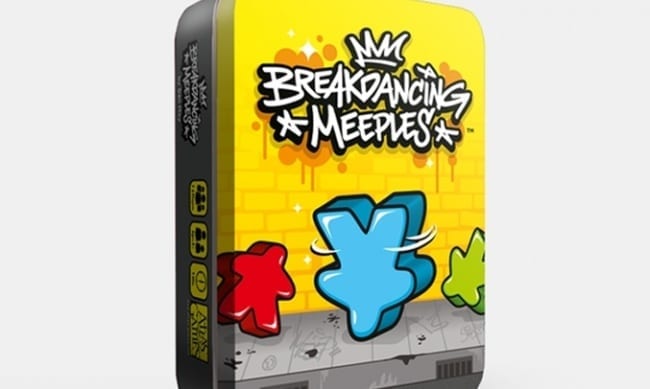 In Breakdancing Meeples, players join up with the hottest dance crew of meeples around to compete in one-minute dance offs for the world championship trophy. To do battle on the dance floor, players roll and re-roll meeples like dice, and the meeples team up to do a routine the way they land. The cards outline various dance routines, like  Whirlyball, Streetsweeper, and Early Bird, to perform and score points. The game plays over the course of four one-minute rounds, and features a free app for game management.

Atlas Games recently released Fairytale Mash-Ups, an expansion for the storytelling game Once Upon a Time, in November 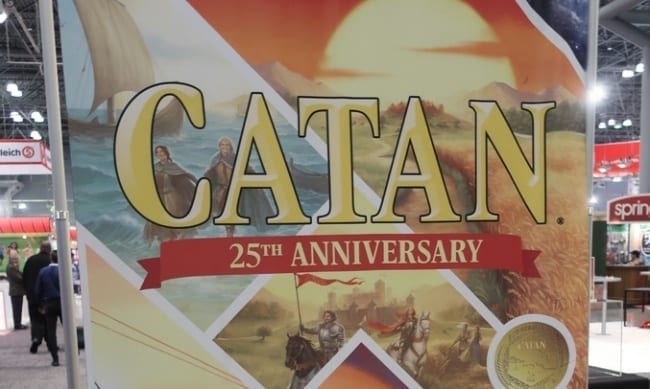 Catan Studios will release two new versions of their flagship game Catan via Asmodee North America in conjunction with the game’s 25th anniversary this year.  Details are still being finalized, but both products were on display at Toy Fair.

Catan 25th Anniversary Edition will feature upgraded components, including custom card sleeves, card sorting trays, marble-themed dice, and custom player pieces, as well as the 5- to 6-player extension and the Helpers Scenario.  Its tentative release date is Q2, according to ANA Business Development Specialist Josh Dummer.  A mock-box was on display.

The more elaborate new version is an as-yet-un-named 3D topographical special edition, for which a prototype was on display.  “The idea is having a three-dimensional Catan board that really enriches the experience, makes it a lot more immersive when you’re looking at an actual mountain where you’re going to mine your ore from, or a pasture with a little sheep in there where you’re going to gather your sheep, and so on,” Dummer explained.  The name of the product, release date, and price have not been finalized. 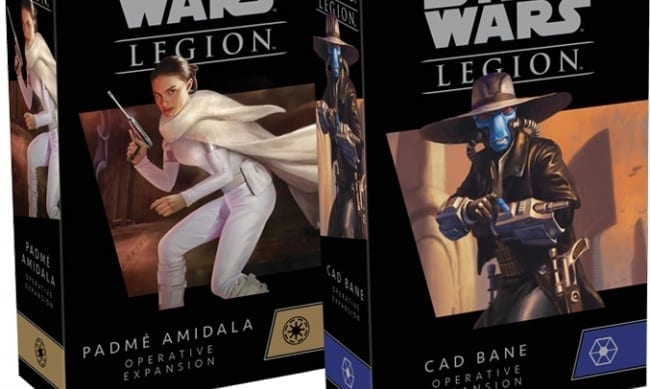 Senator Padme Amidala fights for freedom and democracy from the floor of the Galactic Senate as well as on the battlefields of the Clone Wars. This expansion comes with a unpainted Padme Amidala miniature, a unit card, 6 upgrade cards, and Padmé Amidala’s 3 signature upgrade cards to field in battle. This single figure set will retail for €14.95.

Cad Bane is an incredibly skilled professional bounty hunter who works for the Separatist Alliance. He enters battle, usually with his signature wide-brimmed hat, wielding one or more LL-30 blaster pistols. This pack includes a unit card, 6 upgrade cards, and Cad Bane’s 3 signature command cards. It will retail for €14.95 as well. 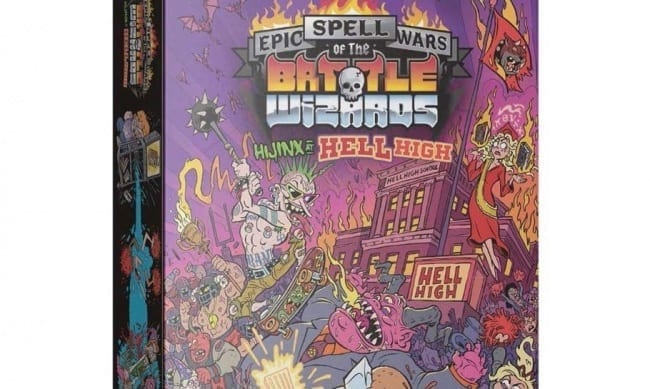 The Battle Wizards are headed back to school to channel some adolescent rage into this deck-builder. Hjinx at Hell High offers players all the fly-by-night spellcrafting and awkward experiences of high school as they play cards to move themselves up and down the social ladder from the class of Ultimate Loser to Class President. 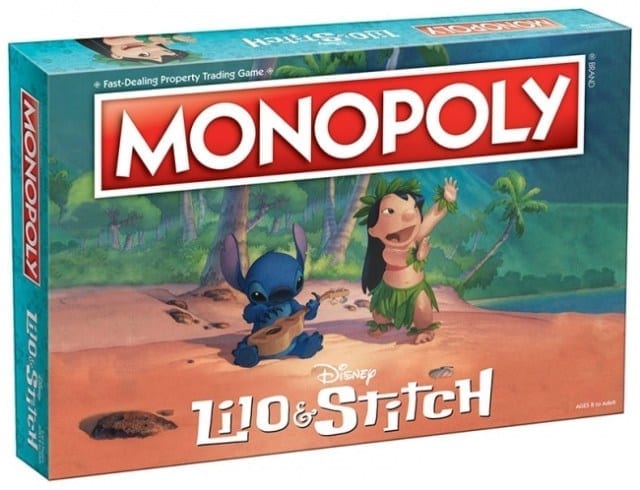 naumanzubair774 Board Games News February 28, 2020
0
Read Time1 Minute, 5 Second
USAopoly (The Op) earlier this year announced two new versions of Monopoly, Lilo & Stitch and Beetlejuice, for broad release in Spring 2020.  These two versions of Monopoly were originally released in Hot Topic stores in September, and were sold there over the course a four month exclusivity window.

Monopoly: Lilo & Stitch offers some tropical flair to a classic game featuring characters from the hit Disney movie. Players can buy, sell, and trade their favorite characters from the movie such as Lilo, Nani, Stitch, and a variety of aliens while the make their way around the big island of Hawaii.  The game box contains  a game board, 6 collectible tokens, 28 Title Deed cards, 16 Galactic Federation Cards, 16 Aloha cards, custom Monopoly Money, 32 houses, 12 hotels, 2 six-sided dice, and rules.

In Monopoly: Beetlejuice, players work their way through a bizarre afterlife in an attempt to become the “ghost with the most.”  They  can buy, sell, or trade their favorite characters such as Lydia, Delia, and Charles Dietz, Adam and Barbara Maitland, and of course, Beetlejuice.  The game box comes with a game board, 6 collectible tokens, 28 Title Deed cards, 16 Haunting cards, 16 Occurrence cards, custom Monopoly Money, 32 Haunted Houses, 12 Paranormal Museums, 2 six-sided dice, and rules. 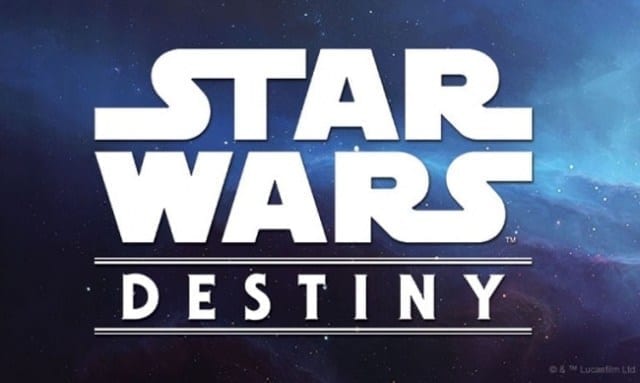 Clearly, 2020 is destined to be a year of change at Fantasy Flight Games. 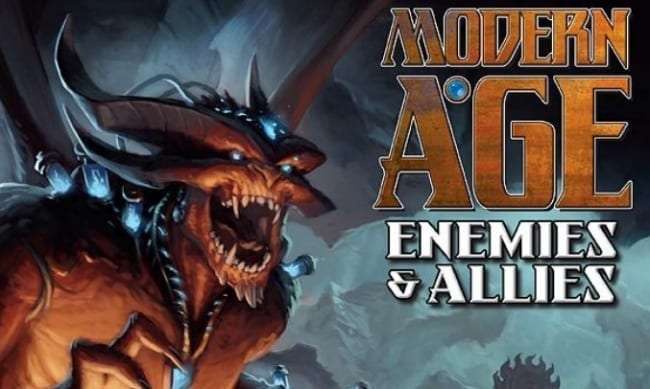 Enemies & Allies gives gamemasters a one stop shop for non-player characters and creatures. The sourcebook covers a multitude of genres; including modern fantasy, horror, near future science fiction, technothrillers, and crime dramas. It will include rules to help players create their own creatures and non-playable characters. Enemies & Allies will also include new game system for “Heat”, a mechanic for how much unwanted attention characters are attracting, as well as geomantic places of power and more.