The judge in Harvey Weinstein’s rape case on Monday denied a defense request to keep the jury sequestered for the entirety of the eight-week trial.

Weinstein’s attorney, Arthur Aidala, argued that the unusual move would be necessary to ensure a fair trial. Prosecutor Joan Illuzzi called the request “laughable” and Justice James Burke denied it.

The trial got underway Monday morning with an extended debate about how to find an impartial jury for a case that has been covered extensively by the media.

Burke, a former prosecutor, outlined the process for selecting jurors, saying it would be done in open court.

“In sum, everyone will have their jury selection in open air right here on the record,” the judge said. “That’s what the attorneys were recommending and suggesting to me.”

The opening day of the trial drew a swarm of reporters and onlookers. But many of the dozens of women who have accused the mogul of assault were not in the audience. Instead, a group that included the actresses Rosanna Arquette and Rose McGowan held a press conference across the street from the courthouse to hail the start of the trial as an important step for the MeToo Movement. Weinstein stands accused of raping a woman in a New York hotel room in 2013, and forcibly performing oral sex on another woman in her Manhattan apartment in 2006.

Prosecutors accused Weinstein’s lead defense lawyer, Donna Rotunno, of maligning one of the witnesses in an interview with CNN. In the interview, Rotunno referred to Annabella Sciorra as a “good actress.” Rotunno defended her remarks, and went on to say that prosecutors maligned Weinstein by calling him “a predator.” 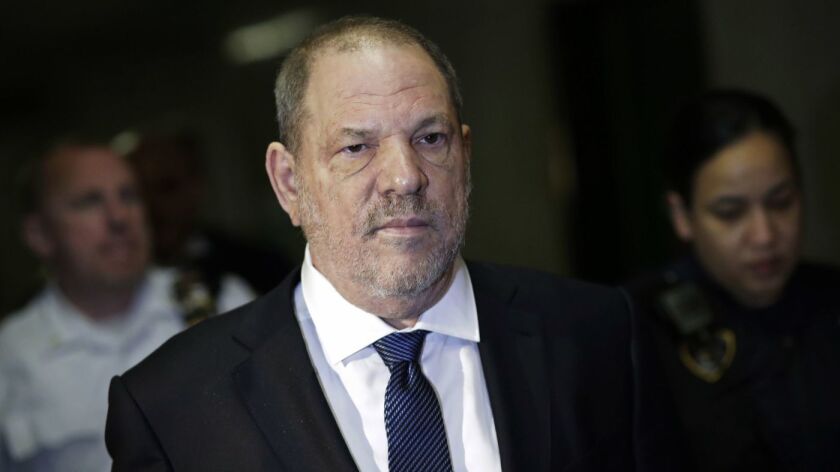 “I don’t think I did anything improper,” said Rotunno. “I spoke to a few outlets on Mr. Weinstein’s behalf. It’s abominable for [Illuzzi] to say I’m doing anything other representing my client. I would not do anything that was not professional.”

Justice Burke wouldn’t bar either side from speaking to the press, but he indicated that they should use less heated language.

“It’s going to be hard enough to get a fair jury,” he said. “None of this helps us attain this goal.”

Prosecutors also requested that Weinstein be forced to remain in New York for the duration of the trial. In a response that elicited muted laughter from the crowd, an attorney for Weinstein, said, “We have no problem with Mr. Weinstein not leaving the state of New York, except for Connecticut [where he owns a home].”

If convicted, Weinstein, one of the most powerful people in the indie film community and the Oscar-winning producer behind “Shakespeare in Love” and “Pulp Fiction,” faces life in prison. Weinstein has denied the allegations and claims that any sexual contact was consensual. His trial is seen as a key test for the MeToo Movement. Weinstein’s fall inspired other people to come forward with allegations of abuse and assault, leading to a public reckoning. Other big-name celebrities and media figures such as Charlie Rose, Dustin Hoffman, Kevin Spacey, Brett Ratner, Louis C.K. and Matt Lauer were just a few of the major names who were accused of misconduct.

‘Wonder Woman 1984’ gets a new release date and poster

Warner Bros Debating If It Should Stream ‘Wonder Woman 1984’ Instead

A New Investigation Begins in the X-Factor #1 Trailer

The CW Moves ‘Stargirl’ & ‘In the Dark’ Due To Production Shutdowns