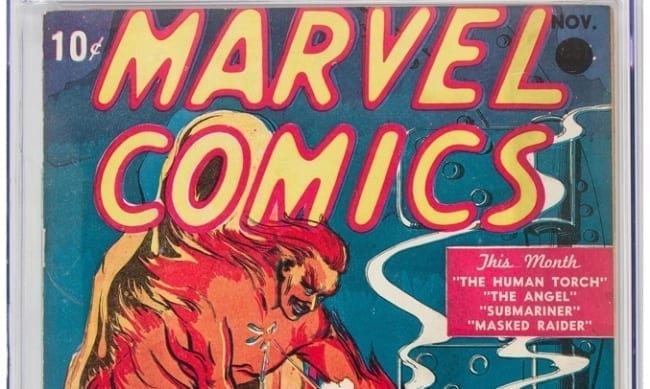 kevinjer72 Comics News November 22, 2019
Read Time1 Minute, 18 Second
A CGC 9.4 Marvel Comics #1 sold for $1.05 million ($1.26 million, with the Buyer’s Premium) at a Heritage Auction on November 21, 2019, a record for the issue. It joins Captain America #1, which was auctioned off in August, as another huge sum realized for vintage, high-grade Marvel comic books.

Marvel Comics #1 was first published on October 1, 1939, and was written by Ben Thompson with cover art by Frank Paul. It featured the first appearances of of the Human Torch, Ka-Zar, and Angel as well as the first newsstand appearance of Sub-Mariner.

The auctioned copy was from the Windy City pedigree collection, which got its name from being first brought to market by Chicago dealer Gary Colabuono, but the collection was actually assembled by a mailman from Uniontown, Pennsylvania who bought several #1 issues from newsstands in the 1940’s. This copy was graded by CGC as NM 9.4 Off-white pages. Only two other copies of this issue are known to exist, according to CGC’s census, that have graded as high as 9.0. The auctioned Marvel Comics #1  is the only 9.4 known with none graded higher.ed higher.