Cooperative Board Games – We All Win or Lose 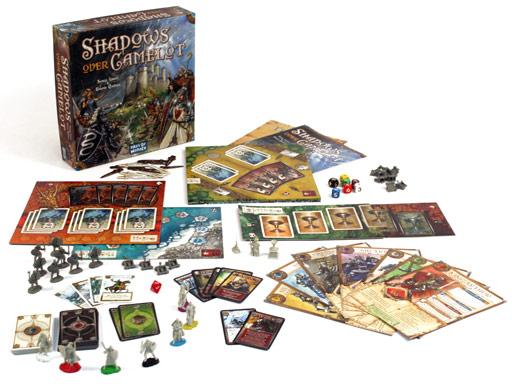 In 2000, Reine Knizia published Lord of the Rings, as far as I can remember the first fully cooperative board game that either everyone won or everyone lost (although individuals could die or be corrupted). There had been other cooperative board games in the past, most notably Axis and Allies, but even that one was basically a two player game that could be divided into individual nations.  Another 1980’s game, Arkham Horror originally from Chaosium and now published by Fantasy Flight Games was based on the Cthulhu mythos. It was a cooperative game but individuals could try to survive and or not go insane. Zombies!!! from Twilight Creations was as much a miniatures game as a board game where players could also stab their team in the back while trying to survive themselves. Lord of the Rings of course, followed the classic Tolkein novels and since its release several more strong cooperative games have come out including Shadows over Camelot from Days of Wonder, Battlestar Galactica from Fantasy Flight Games, Pandemic from Z-Man Games, among others.

The two games I have played the most from those listed are Lord of the Rings and Shadows Over Camelot. One of the first things I noticed in LOTR was a score sheet. Players could record the participants and how far along the “path” the team made it. This was a game you were not supposed to win every time. In fact, it was three times through the game before anyone from the team even made it to Mount Doom. After mastering the rules it was probably another five or six games before we could win half of the games we were playing. In Lord of the Rings players are each one of the four hobbits. Characters such as Legolas, Gimli, Aragorn, and Gandalf etc… were cards used to help the players rather than being participants. There are three expansions available for LOTR including Sauron in which a player can be the bad guy, Sauron himself. The others are Friends and Foes, and Battlefields.

Shadows Over Camelot requires trading and cooperation from the opening turn to survive. In addition, there is an option where one of the players may or may not be a traitor. Players are initially given random character assignments from King Arthur’s Round Table and then a number of Loyal/Traitor cards are shuffled and handed out. There is only one Traitor card and +1 or +2 Loyal cards. Nobody knows if the others are Loyal or a Traitor. Sometimes there is not a Traitor as a result. The problem is some actions make a player appear to be a Traitor even though they are Loyal. One of the ways to improve the chance of victory is to unmask the Traitor, but be warned, falsely accusing another Knight of the Round Table leads to a probable loss. While the Traitor is covertly working against Arthur, he must hide his true intentions. If he is uncovered he continues to disrupt the activities of the Knights but with less power. There is one expansion for Shadows over Camelot, Merlin’s Company. Shadows Over Camelot won a special Jury award from the presenters of the Spiel Des Jahres in 2006.

For those who prefer the science fiction genre Battlestar Galactica is an excellent and difficult game. There are three expansions available as well, Pegasus, Exodus, and Daybreak. Like Shadows Over Camelot there is an opportunity to be a bad guy, one of the Cylons. Unlike Shadows though players may be a sleeper Cylon like the character Sharon “Boomer” Valerie, starting out as a player and discovering later they are a Cylon.

One of the most popular cooperative games has been Pandemic and its two expansions, Pandemic: On the Brink and Pandemic: In the Lab. The base game was awarded Family Board Game of the Year in 2009 by Games Magazine. Following the success of its predecessors this cooperative game added a mad scientist to disrupt the plans of the good guys.

All of these games are highly recommended for groups with one or two inexperienced players accompanied by people that have played before. Many strategy games can scare off players unfamiliar with the rules. These allow players to work together and learn while playing. An important thing to keep in mind is that helping a player doesn’t mean “tell them what to do”. For teaching purposes many times it is best to give the player their options and possible outcomes of their actions. This is also a good way for an evil character to hide their identities.

Be on the lookout for these games to be added to the store soon.